OK, so you may be wondering how a dog gets involved with making greeting cards?

It all started because every day Schmitty would pass by Ladder Co. #25 on her way to Central Park to run and play. The firehouse was a 1/2 block away from where she lived. The firemen always petted Schmitty, gave her treats, and kidded her about her immense size. One day, some of the firemen were not there anymore. Instead there were all these flowers and candles in front of the station and a lot of people just staring and crying and hugging each other. 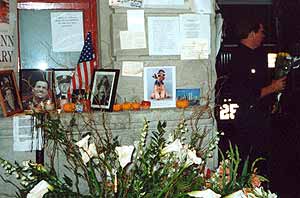 That's when Schmitty found out about the 9/11 disaster and how 9 brave firefighters from her neighborhood station were lost in the World Trade Center saving others. Schmitty was so sad. She just couldn't sit still. She's a terrier, remember? Schmitty just had to do something! She couldn't give blood and was too small to try and help in the "big dog" rescue efforts. So, Schmitty gave a donation to the families of the firefighters at Ladder Co. #25 along with a picture of her in patriotic red, white and blue sunglasses. Her firefighter friends hung it on the wall of the firehouse.

One day at the firestation, two women with tears running down their cheeks were pointing to Schmitty's picture and laughing. Then the women looked down and saw Schmitty walk by and they started smiling and hugging her.

That's when Schmitty knew . . . she knew what she could do.  Schmity could make people giggle, even through their tears.

So, she went to a studio near Union Square and posed for some pictures . . . some patriotic, some sentimental, and some just plain silly. A very creative friend, David, who works for an ad agency in Boston, helped put together some greeting cards from the fun pictures. Another friend, Chad from Los Angeles, helped design Schmitty's website, www.schmittysays.com. All the profits from her cards went to the Uniformed Firefighters Association Scholarship Fund. 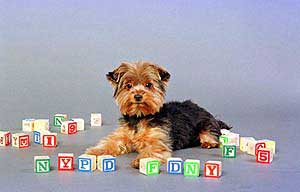 Schmitty's giving back has snowballed into new projects and products. Now a portion of Schmitty's cards, calendars and people & pet products goes to her foundation, DOGS WHO CARE, created to raise money for animals across the country who were displaced and became homeless by disasters like the 2005 hurricanes and now everyday life.

Schmitty, The Real New Yorkie is one busy pup!